The Keppel Marina East Desalination Plant (KMEDP) was recognized by Global Water Intelligence as the Desalination Plant of the Year in 2021. Victaulic is proud to have provided grooved solutions, including couplings, fittings, and valves, to the piping systems on this critical infrastructure project.

The Global Water Intelligence (GWI) is “the leading publisher and events organizer serving the international water industry.” Each year, the GWI recognizes initiatives, projects, plants, technologies, and companies that significantly contribute to the water industry with the annual Global Water Awards. To be selected as a Global Water Award winner, a panel of independent experts examines each nomination based upon a set of criteria that improved operations and energy efficiency, technological innovation, and the implementation of sustainable financial models.

The Keppel Marina East Desalination Plant (KMEDP), located in Singapore, was awarded the 2021 Global Water Award for the Desalination Plant of the Year. This plant demonstrates the “most impressive technical and ecologically sustainable achievement in the industry.”

The KMEDP is the world’s first dual-mode desalination plant, built with the ability to treat both freshwater and seawater depending on weather conditions. This critical component of Singapore’s water security strategy was built to provide a reliable source of water to the city-state, capable of producing 127,000 cubic meters (approximately 30 million gallons) of drinking water each day.

In addition to being a sustainable and efficient water resource, the KMEDP also provides urbanization benefits to Singapore. The plant and pumping station was constructed entirely underground. This created a 20,000 square meter (sqm) area of open green space on the rooftop of the plant dedicated to public recreation, which, integrates seamlessly with the surrounding greenery. KMEDP became the first industrial plant in Singapore to be awarded the Active, Beautiful, Clean (ABC) Water Certification (GOLD) by Singapore’s National Water Agency (PUB).

If interested, the public can observe the desalination facility through a viewing gallery on the rooftop area.

Many of the above-mentioned systems at the KMEDP included Victaulic’s solutions for the desalination market. On the reverse osmosis system, the Series 465 MTS Plug Valve was utilized for on/off and cleaning in place (CIP) services. The Series 465 Duplex Plug Valve is designed to support high-pressure pumps, which feed the seawater to the membranes to remove salt, accommodating up to 80 Bar of working pressure. Additionally, the Series 465 Duplex Plug Valve provides a zero-leakage bidirectional valve solution, which met the design of the KMEDP.

With over 20 years of use in reverse osmosis applications, the stakeholders of the KMEDP knew that the Victaulic MTS Plug Valve solution they were utilizing would be of better quality and performance than any other option. Through the use of grooved couplings, fittings, and valves for super duplex stainless steel pipe, Victaulic provided a reliable and sustainable pipe joining solution that enabled a reduction in the construction schedule.

To learn more about how Victaulic supported the KMEDP, click here.

To see examples of desalination projects that Victaulic has supported around the globe, click aquí. Victaulic provides solutions to desalination facilities as they strive to meet the increasing demand for clean water sources. 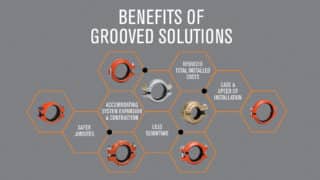 Grooved mechanical systems are the most reliable solutions available. Check out our blog to review the top five benefits of grooved systems.