Cutting for Coal: The Long and Short of Longwall Mining Cutting for Coal: The Long and Short of Longwall Mining

Sometimes, it really is all in a name.  Largely recognized as productive, efficient, and safe, longwall mining is a highly mechanized underground mining method in which – you guessed it – a rectangular ‘long wall’ of coal, also known as the coal seam or longwall panel, is mined in a single horizontal slice.  Longwall mining is used to extract coal where surface mining is not a viable option.

Depending on the height of the coalbed, either a plow or a shearer is used to continuously cut section after section of the seam, in a back and forth motion, across the vertical coal face until the complete longwall panel has been mined.  As the plow or shearer cuts along the working face, the raw coal is loosened and falls to a parallel conveyor system for removal from the mine.  In addition to the employment of a cutting machine and conveyor, the use of self-advancing hydraulic ceiling supports is crucial for both productivity and safety in longwall mining.  These automated ceiling supports, or hydraulic shields, travel forward horizontally with the other machinery as the longwall sections are mined, allowing the roof to collapse and fill the void behind them.

Visit Victaulic next week June 13th-15th in Pittsburgh, Pennsylvania for the 2017 Longwall USA Exhibition and Conference.  Click here to learn more about the show and register to attend! 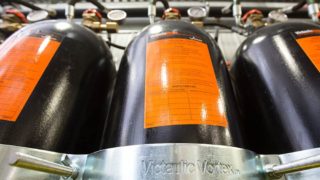